The Answer is Jesus 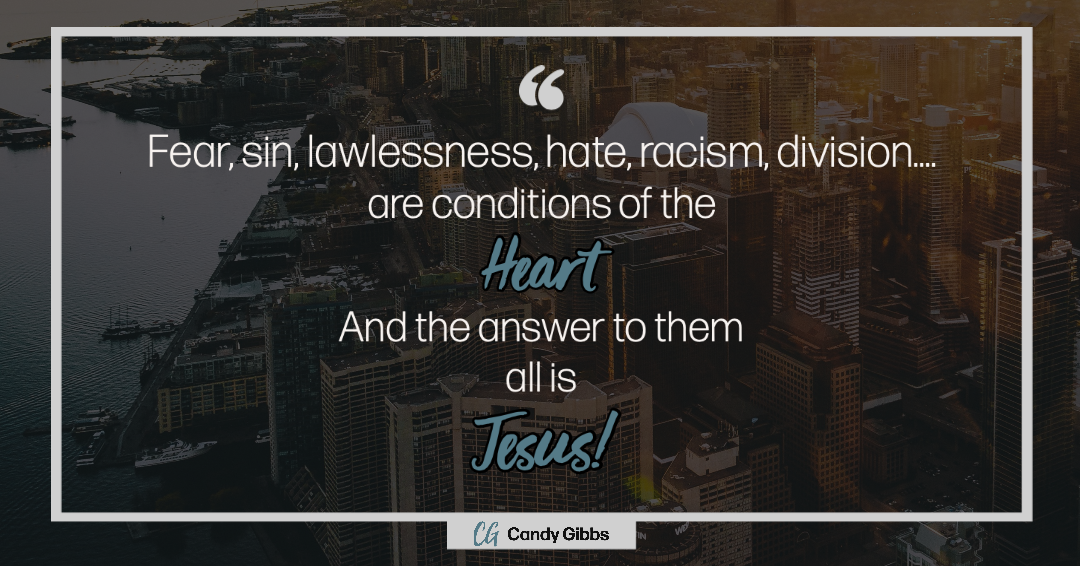 Truth comes from the Word of God and He is comfortable with what He said and how He said it. Regardless if you agree with it, like it or wish it were different…His opinion is final. It is time that we as His servants, as the Body of Christ, as the Church, stop apologizing for Him and stop trying to sugar coat things.

If there is a side to be on, it isn’t yours or mine…it is His.

“13 Now when Joshua was near Jericho, he looked up and saw a man standing in front of him with a drawn sword in his hand. Joshua went up to him and asked, “Are you for us or for our enemies?”

14 “Neither,” he replied, “but as commander of the army of the Lord I have now come.” Then Joshua fell facedown to the ground in reverence, and asked him, “What message does my Lord[a] have for his servant?”

15 The commander of the Lord’s army replied, “Take off your sandals, for the place where you are standing is holy.” And Joshua did so.”

Almost everyone is weighing in and most everyone is taking a side. I have had many thoughts, opinions and emotions over the chameleon culture we are all surviving. Quite frankly, and by God’s grace, I have not been able to sit still long enough to put those words on paper. Hope Choice had our largest fundraiser of the year on February 18th. After the banquet, I took a trip to College Station and one week later had surgery. I was out for three weeks and while out recovering…well, the world changed.

Over the last four and a half months, we have gone from preparing for proms, graduations, baseball and softball seasons, track seasons and making plans for summer trips and camps, to being in quarantine for weeks, learning how to make hand sanitizer and facemasks, fighting for toilet paper, changing the way our businesses operate, the way we serve our neighbors, and canceling and closing everything. Like a yo-yo, the economy failing…improving…failing…. churches closing, churches opening, leaders on all levels making decisions they never dreamt they’d face, fighting with our friends on social media over whether to wear or not to wear masks (oh, and asserting your thoughts on a mask mean either you want everyone to die or you don’t care about freedom), homeschooling our children, learning how to Zoom without letting our pajama pants show, claiming that people who want the economy to open are not really “pro-life”, and on and on and on.

Fear has been running rampant, and hate was right on the heels of that fear.

When all of this began in March, the Lord very clearly impressed on my heart, “Step in, no steps back. Period.” My two college kids were home, as I am sure many of yours were. My son, Jake, was set to work for a Christian camp this summer as he has done the past several years. Our family and yours had already seen so many disappointments, so many plans and milestones canceled, and camp would be next on the chopping block. As we prayed about that, the direction the Lord gave us was to fill the gaps, to step forward, to find a way over or around any mountains in our way. Under the direction of eight incredibly gifted college students, we had Rise Camps 2020! We did a week of teen camp and a week of kids’ camp. We followed all of our state Covid-19 precautions, provided masks for all and kept them in cohorts etc.…but we had camp, and it changed all of our lives. We had 292 teens and kids attend and 30 of them accepted Christ as Lord and Savior. I don’t have time to share all of the miraculous stories of the Lord moving during Rise Camp, but I will never be the same, neither with the campers or our community. God came near.

These young people needed a refuge. They needed to escape the chaos, the hate, the rioting, and the fear. They needed to be reminded of the God we serve and that our God calls us overcomers. They got their hopes up and God came near.

While the country was talking about George Floyd, racism, white privilege, defunding the police, anarchy, hate and lawlessness…these incredible young people, young people of every race and socioeconomic group, some believers and some not…entered the Presence of the Father. They petitioned His Court. They stood at the moment. They chased Him. They praised Him. And He responded. He changed us. He lavished His love on us and we loved each other. But it was not because someone talked us out of or even preached us out of racism or talked us into wearing a mask. We simply sought Him. We were on His side.

Sin, hatred of all kinds, fear, the enemy … are not overcome by our opinions, by seeking public approval, by demonstrating, by looting and rioting, by lawlessness, vandalism, pandering, coming against police, or violence. Sin, hatred, fear, and the enemy are overcome by the word of our testimony and the blood of the Lamb. We have all sinned. We all need a Savior. We have one, and none of us, no not one, deserve Him or the salvation He provides. He is kind, just, and merciful and loves all of us without exception. Jesus died for George Floyd and for the cop who took his life. Jesus died for people who misjudge others because of their race and He died for people who are misjudged because they wear a uniform.  Jesus died for you and for me.

As our culture is asking “Are you for us or for our enemies?” The reply would be the same…

14 “Neither,” he replied, “but as commander of the army of the Lord I have now come.” Then Joshua fell facedown to the ground in reverence, and asked him, “What message does my Lord[a] have for his servant?”

15 The commander of the Lord’s army replied, “Take off your sandals, for the place where you are standing is holy.” And Joshua did so.”

I will learn from 300 young people who came together this summer to Rise, to stand in the moment before the miracle. They stood on Holy Ground and declared that we will see a victory.

We need to learn from the next generation. This nation needs a refuge. We need to escape the chaos, the hate, the rioting and the fear. We need to be reminded of the God we serve and that our God calls us overcomers. We need to get our hopes up and we need God to come near.

May we all learn, just like we did at Rise Camps…this is Holy Ground. We need to be on His side. The answer to every question is Jesus. Let’s point people to Him. We will see a victory.

The rest of this is nonsense.